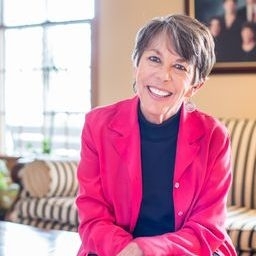 Just like you, I was born and, five years later, went to school. In sixth grade, my teacher told me I was the best writer she’d ever had. That afternoon while walking the five blocks home, I decided to be a journalist. The plot thickened in high school when my father declared I’d be majoring in nursing. (“Women don’t get jobs in the newsroom,” he’d remind me—and he was almost, but not quite, correct.) If I’d gone into nursing, there are thousands of people alive in Central Iowa today who would otherwise be dead.

I went to Creighton University ( Omaha) armed with two goals: to seriously study the night before every test, and to end up working for a newspaper. During my final semester, I interviewed an editor at the Des Moines Register and Tribune for my senior project. After he’d answered all my questions, the editor offered me a job, to which I replied, “Huh?” followed by, “Sure!” Three years later, I married and left the newsroom to birth three babies in four years. My only goal then was to get a good night’s sleep.

I moved into free-lancing, knowing I could do the laundry between paragraphs. For 20 years, I freelanced for newspapers and national magazines. Then, after a friend died of cancer in 1991, my first book, She Taught Me to Eat Artichokes, emerged. Though I did not intend to write more books, nine have followed and No. 10 is coming together. Two -- Artichokes and When I Think about My Father (a collection of essays) -- were considered for Oprah Winfrey shows.

There is a big difference between being considered for Oprah and being on Oprah.

I’m the Iowa Author (2012-2013); member of the Society of Midland Authors and Published Authors Liaison of Central Iowa. I teach at the University of Iowa's Summer Writing Festival (16 years); co-conduct writing retreats for women and run two Writers Groups. I've also taught in the J-schools at Iowa State University (Ames) and Drake University (Des Moines) and in the Iowa Correctional Institution for Women prison. 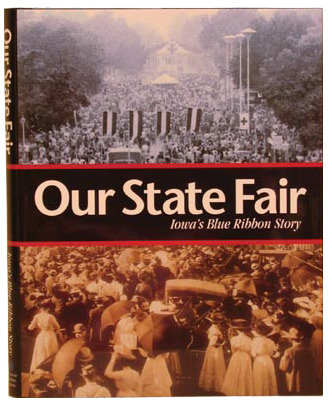 The venerable Iowa State Fair celebrated its sesquicentennial in 2004 with the release of a coffee-table book tracing its humble origins in Fairfield, IA, to today’s event that draws more than 1 million people annually. Such rich history evolved from those first visionaries who touched a fledgling effort intended to develop Iowa’s wealth and increase its people in “the scale of intellectual being.” (Read that as an experiment on six acres of land in Fairfield.) The book enables us to look back, to when the Fair moved from town to town and women raced horses; to when entertainers had to stay "outside of the fence" and the Fair shut down because of war; to 1886 when the venerable Pioneer Hall (National Register of Historic Places) was one of the first buildings on a finally permanent site so far east of Des Moines that fairgoers took the train to get there. It's history through the eyes of the farmers and the city-folk, of the 4-H kids and their calves, of the huskers selling machines that dice & chop carrots, of children forever awed by the Midway, of entertainers packing the Grandstand on hot August nights. It's all their stories--stories we're all part of.

The book traces a fascinating evolution of Iowa and Iowans in six sections—A Grand Tradition; Chasing the Blue Ribbon; What a Lineup! (entertainment); The Ag Extravaganza; Those Super Structures (they’re on the National Register); and Meet Me at the Fair. That final section serves up a potpourri of everything from the food to the campgrounds to the queens, to the book-the movie-the musical.

With thanks to Designer Paul Micich for seamlessly incorporating 500 visuals among the words, this book is a treasure to treasure.

This Is Kemin-Fifty Years of Innovation

Rhythm of the Seasons-A Journey Beyond Loss

When I Think about My Father-Sons and Daughters Remember

She Taught Me to Eat Artichokes