Erstwhile Jersey girl Maralyn Lois Polak is an award-winning Philadelphia-based journalist, novelist, editor, essayist, spoken word artist, Reiki channel, screenwriter, filmmaker, and cartoonist. She has reviewed books for the New York Times, guested on NPR's FRESH AIR with Terry Gross, performed one-woman shows for the Philadelphia Fringe Festival celebrating the animal-human bond. Her collection of food/love poems, "THE BOLOGNA SANDWICH AND OTHER POEMS OF LOVE AND INDIGESTION," was made into a menu for the Book and the Cook Restaurant festival, and served up at two romantic cafes. As a creative concierge, she has meditated for more than 20 years. She has studied Mindful Meditation with Michael Baime MD, the pioneering Philadelphia physician who very early on explored links between disease and stress. She has also practiced the gentle, slow healing exercise movements known as Qi Gong with teachers Kevin Starbard and Paul Martin outdoors in local parks. And she is a trained and certified Reiki Level Two Instructor, for People, and Therapeutic Touch, for Pets. She has taught all levels of writing, including children creating their own novels; finding your 'VOICE' as a writer; and microphone techniques for poets and spoken-word artists. Currently she's screenwriting, completing a comic novel or two, creating totebags from recycled classic toys, and making cartoons and graphic novels though she can't draw a jot! 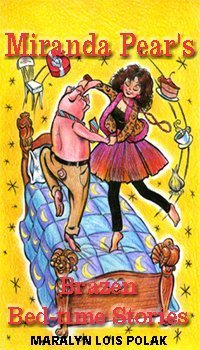 Meet Miranda Pear, a Jersey-born brunette with a sweet affinity for pets, a spiky attitude toward boys, a smart mouth, and an insatiable desire for a happy childhood at any age. As a little girl, she talks to flying mice and puzzles over her mother's collection of wigs. As a grownup in Dorkadelphia, Miranda Pear, like many of us, realizes for a world gone wacky, wrng, and pretty weird, LOVE is your best defense.