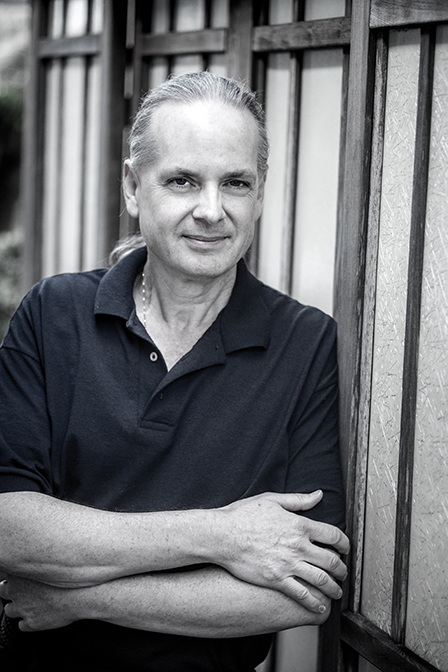 I write what I call contemporary literary sci-fi and what others sometimes call techno-thrillers. You can find many articles written about my work in newspapers and magazines. In a 2014 article Publisher’s Weekly labeled me as one of the “Writers Who Rocked Self-Publishing.” Prior to that Publisher’s Weekly also did a full page interview of me: “The World has Completely Changed.”

I have been awarded starred reviews for my novels from Publishers Weekly as well as high praise from many other book review publications. I am also a writer for national computer magazines, founder and president of two high technology corporations, a scientist and engineer for over 35 years, and the inventor of an advanced electric car system. I was also a short order cook for I-Hop, flipped burgers at McDonald's, and delivered Chicken Delight. All of those careers and more have been behind me now for many years since I became a full-time storyteller, a catcher of dreams. Thank you for reading my stories and making this all possible.

I have lived more than one life during this one life and awoken into many before… I have truly led an epic life. I am the luckiest man alive and have had two great loves… two great chapters… My first wife Mazelle and my second wife Dana. I love them both with all my heart.

Here is a biography written by my first wife, Mazelle, my best friend, my guardian angle who I lost at far too young an age to pancreatic cancer…

At 3 years old, he made spaceships out of his parents' discarded moving boxes and pretended he was flying. By 4, he'd built motorized dinosaur models that walked. By kindergarten, he was taking robots apart and building them into other creations.

By the ripe old age of 8, he'd moved into making "future-predicting" computers. Engineered with a large box, electric motors mounted on the front, big tape wheels mounted on electric motors so they would spin and the tape would move, tons of little flashing computer lights, and a tape loop with computer sounds on it, his computer would allow his patrons a.k.a. parents to pay to ask “future-predicting” questions. After a certain amount of flashing lights, sound effects, and time had elapsed, he would drop an answer on a card down a metal chute, a castoff part from his sister's Betty Crocker's Kitchen.

Thus are the humble but extraordinarily resourceful and creative beginnings of Kevin Bohacz, founder and President of CPrompt. Educated as a physicist, by age 21, he'd designed and applied for a patent on an electric car. His electric car system has yet to be replicated in efficiency and simplicity. Kevin continued with his unquenchable thirst for creating cutting-edge technology and inventions, utilizing advanced engineering and creating custom software and hardware solutions for clients.

At the dawn of microprocessors, as an electrical engineer, he designed early hardware and software microprocessor systems. His career evolved with the birth of the personal computer revolution and with the emergence of the internet. He foresaw the web revolution and was a first-mover in e-commerce, developing an early e-commerce system Sendsafe that continues as an innovator today.

In 1992 Dream Dancers was published while Kevin was living in Los Angeles. This was his first and some consider his best novel.

In 1994, he relocated his company to Dallas, TX to take advantage of the web-broadcasting potential of the Central United States (and to find his bride). Over the years in love in Dallas he wrote several more novels, the second of which became, Immortality.

In 2014 the sequel to Immortality titled Ghost of the Gods was published in March and immediately became a #1 bestseller and the #1 hottest techno-thriller and sci-fi on Amazon for March 2014. At the same time Immortality staged a come back and achieved its best sales to date. So Kevin now had two bestsellers at the same time.

I was born in New York City and lived in: Manhattan, Los Angeles, Venice Beach, Marina del Rey, Santa Monica, Tampa, St. Petersburg, Boca Raton, Oceano, Pismo Beach, Monterey, Santa Cruz, Philadelphia, Las Cruces, San Jose, and too many other cities in the United States. I can be currently found dreaming and writing in Jacksonville Florida… and trying to make the world a little bit more like a dream. 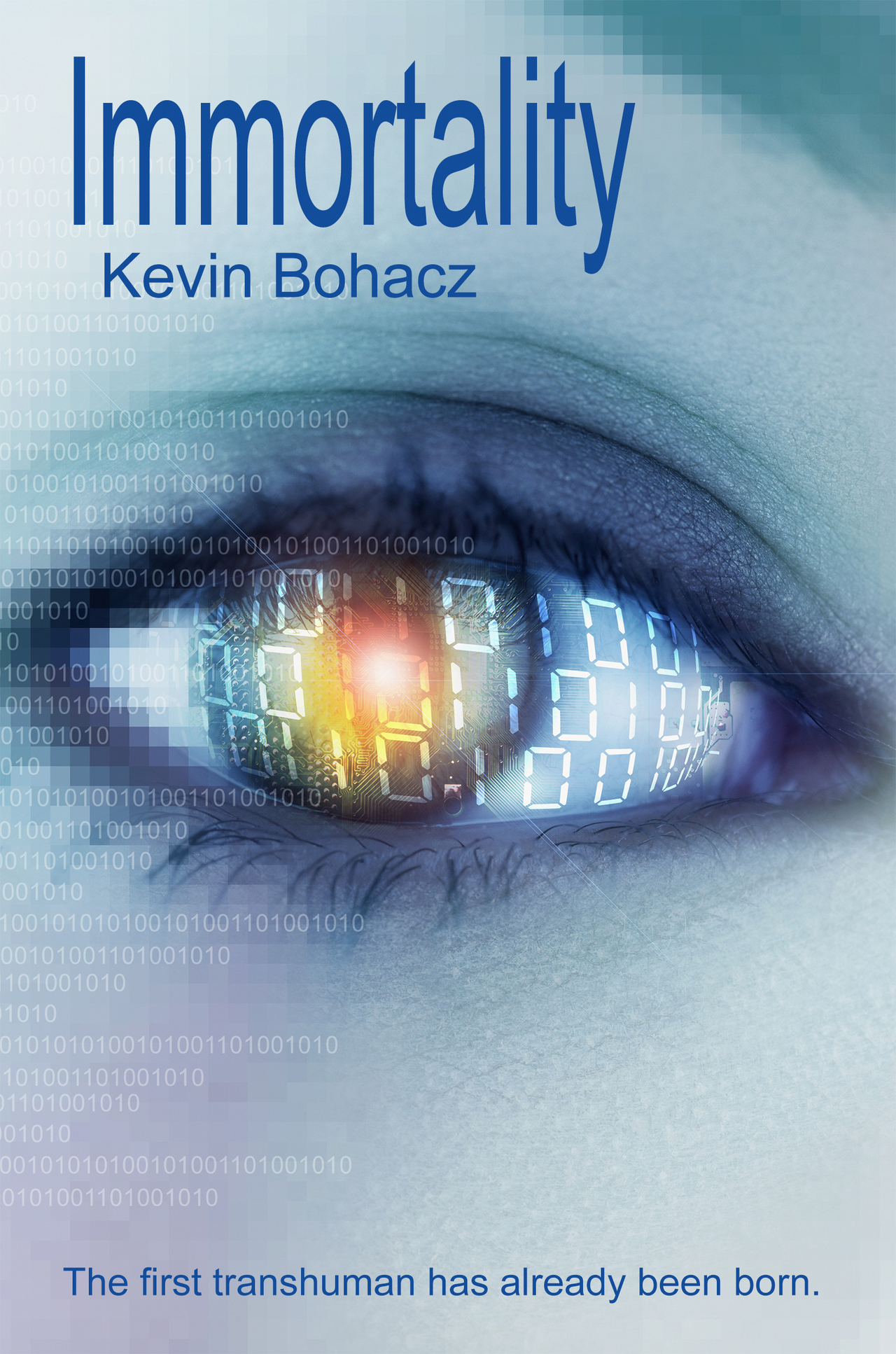 Kirkus: There is enough power in the premise to leave readers reeling. A novel that will surprise fans of science-fiction and doomsday scenarios…

Publisher’s Weekly STARRED review: Bohacz’s vision of a humanity that faces the need to evolve profoundly or face certain destruction is as timely as today’s news and as chilling a doomsday scenario as any ecological catastrophe can suggest….

Full Publisher’s Weekly STARRED review: When human extinctions occur in South America and spread worldwide, paleobiologist and genetic researcher Mark Freedman senses a connection to the Chromatium Omri bacteria, the oldest known life form on Earth linked to previous extinctions. The growing virulence in the “kill zones” spurs Freedman to join forces with Kathy Morrison, expert on viral and bacterial pathogens with the Centers for Disease Control. Despite personal losses, Freedman and Morrison find romance and make discoveries about the devastation and what lies behind it. Other colorful characters include dedicated policewoman Sarah Mayfair, whose horrific dreams and improbable survival enable contact with the forces behind the outbreaks; cynical Gen. James McKafferty, committed to preserving the U.S. at whatever cost; and Artie Hartman, goaded by his wife’s death to wage war on gangs and government forces indiscriminately. The seemingly random attacks and emergence of chaos allow Bohacz to explore such themes as whether humanity deserves to survive, the meaning of being human, and the cost of perfect health and immortality. The originality of Bohacz’s ideas is nearly equaled by detailed descriptions of a decontamination lab, the frenzied search for answers, and the aftermath of destruction. His vision of a humanity that faces the need to evolve profoundly or face certain destruction is as timely as today’s news and as chilling a doomsday scenario as any ecological catastrophe can suggest.

Sci-Fi Reader – S.J. Higbee: This book manages to do what all the best sci-fi does – provide a thought-provoking, alternative viewpoint on the business of existence. I recommend you give it a go. (read the full review)

“Speaking as an evolved Transhuman, I applaud this very entertaining, intelligent, and thought provoking journey to the edges of humanity.”
Danny Rubin, author and screenwriter of Groundhog Day.

“Immortality is a fine, tense, scientific mystery adventure that puts mankind in a challenge of survival with a short time limit. This is the way the world could end.”
Piers Anthony, author of 21 New York Times best-selling novels.

Immortality, the #1 best science fiction book of 2008 by W Thomas Payne No. 1 – “Immortality” by Kevin Bohacz capitalizes on the theme of impending environmental collapse and the rapid extinction of species that we read about daily in the national news. Following in the wake of the Hugo-award winning novel “Darwin’s Radio” (Greg Bear), Bohacz keeps the reader riveted with a tale of how the rules of evolution when being crushed by environmental factors could create new species that are “hidden” amongst us – including fellow members of the human race.

Ghost of the Gods